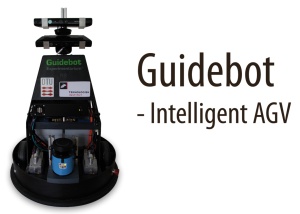 Almost a year ago i started working on the “Guidebot Project”, as i prefer to call it. The project is a result of cooperation between the Danish Technological Institute and the Technical University of Denmark.

My task is to create a mobile robot capable of acting and maneuvering intelligently, based on interpretation of the immediate environment, carrying out logistical tasks by locating and moving trolleys.

Even though this is an ongoing project, it has already been presented for the public at numerous occasions. Here is a complete list with links to articles and vidoes:

The week before the large Scandinavian Industry Expo 2011 a fair-addition to “Ingeniøren” (The Engineer) was distributed to all subscribers. In this addition was highlights of some of the technologies to be seen at the expo, including the Guidebot.
The focus of the article is on use of Kinect sensors in research and development of autonomous robots, and features pictures of the Guidebot with mounted Kinects.

As per request from the author of the article i recorded a video of the Guidebot in action.
This was a far from finished version, but an acceptable demonstration none the less.

A shorter version of the video was also released.

During 4 days of the hi[11] fair I was in Herning to display the Guidebot which was to drive around the booths of DTI and DTU both located within the Robocluster floor area. The robot was well received by the ~20.000 visitors of the fair and was one of only few mobile robots present.

I later created the following short video from footage recorded at the fair.

Every year an annual Culture Night is held in the Danish capital Copenhagen, allowing access to numerous museums, galleries and ministeries. As per request from the Danish Ministry of Science, Innovation and Higher Education the Guidebot was displayed at the ministry, where it was configured to allow remote control by a wireless joypad, which proved to be of great interest to the more than 3.000 visitors of the evening.

One of my other projects, a live demonstration of the Kinect sensor visualized with MATLAB, was also presented alongside the Guidebot.

Twice a year DTU is inviting potential future students (and everyone else) to come to campus and experience a bit of what we do. Every study line has its own booth at which some of its students present selected project. This year the Guidebot was programmed to complete a simple demonstration during the event.

The following video of me explaining some of the basics behind the Guidebot was taken at as part of a promotional (Christmas) project for the department.
(Warning: It’s in Danish)

This year the European Robotics Forum was held in Odense, Denmark, and the Guidebot was displayed as part of the exhibition.

The exhibition was visited by the Danish Minister of Science, Innovation and Higher Education, as well as journalists from Danish television and newspapers.
A short glimpse of the Guidebot can be seen in a video from the newspaper “Ingeniøren”. I will be working with development of the Guidebot platform for as long as there are exciting new ideas to implement, and will update this list along the way.

When the Guidebot is to be displayed next, I will try to announce it with a post here beforehand.

You may have had one of the very first gameboys with a monochrome display and a ton of game cassettes to switch between. Now, imagine having that gameboy upgraded with a color screen almost twice the size, and driven by a Raspberry Pi preloaded with all of the games. This is what several people have […]

For the past 14 months, I have been the Technical project manager of the INNOSORT project, and have been responsible for managing development of the ScanLab setup. By Mikkel at January 16, 2016.

This last semester I’ve spent some of my study time on a new project. The goal was to create an easily reconfigurable demonstration of an AGV doing robust towing of carts between predetermined areas. Whereas the developed solution is created for use with the mobotware platform, the concepts and general documentation could be used in […]